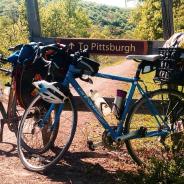 Sometimes the path to freedom is clumsy, achieved only by trial and error. That was the case for me one rainy 60 degree Thursday in May. A few friends and I were going on a four day bike camping trip from DC to Pittsburgh, that is, if I could figure out how to bike with all this stuff without tipping over. I never made it to REI to buy a sleeping pad, so I experimented with different angles in which to slide the cot poles into my makeshift milk crate bike rack.

I first slid them sideways, like a mini jetliner, silver poles akin to three feet long airplane wings. Tipping over, neighbors waiting at the bus stop peered over with a look of confusion. I then tried length wise, airplane wings traded for airplane streaks hanging off the back. I tipped over again, this time neighbors lightly chuckling through their perplexed grins.
I rested my heavy bike against the porch, while all five tent poles slid through one of the crate holes. “Damn it!” I shouted, chucking bagels and bananas from the crate to the porch. I leave the groceries I bought at home, taking just enough food to get through the next 24 hours, grabbed my sleeping bag and a blanket, and left the house.
Stepping onto my bike, the first few pedal stroke felt liberating. My sole task these next four days was to simply bike on wooded trails with apertures to mountains, gurgling streams swimming with us, with nothing but my backpack and crate, plus the camaraderie of a few friends until we reached Pittsburgh 330 miles later.
This is freedom, at least, one form of it: to have all you need to get you until just beyond the next day, so that you might truly take your days one at a time. Freedom to feel movement, momentum, the wind on your face, sun to your skin. To bear witness to light and water and air, fresh air. To hear the owls, lay beneath stars, and simply be. It’s not always easy to reach this place, and many thoughts of my unknown future would try to bite at the outskirts of this space. But my feet are pedaling, I was in motion, the thoughts and fears of the future trying to lurk in the shadows of mile markers simply couldn’t keep up. Because I was moving forward into sunshine lit gravel paths, not turning back.
. . . .

Thump, thud, thump. “What was that?” I asked, hissing from my back tire answering back. I took out my headlamp and began to fix my flat. “I believe you forgot this,” David motioned, holding up my can of dented vegetarian chili, one of the few food items I brought that also took a beating from the pothole. We burst out laughing and pitch our tent in the dark, trying to make sense of terse instructions with inadequate pictures, poles poking out of corners, until we reached sleep.

The next day brought more flats, fixes, and an unsuccessful stop at a meager bike shop, followed by a successful one. “That’s a lotta gear you got,” the owner greeted us, welcoming us into his small town shop. I bought two tires, having been the only one to not consider beforehand just how worn mine were. The owner invited us back to his work area to tackle the tires. Sensing our slow progress, the owner bent down, “I usually go like this, ” he said, trading levers for bare hands. He told us about his nine year old daughter and all of the bike maintenance skills she could already do, while the other shop owner told stories of when he made this exact trip. “But you all are crazy camping. We did bed and breakfasts.” We laughed and soon were on our way, saying goodbye, warmed by small town kindness.

“Listen, baby, ain’t no mountain high,” Devan sang.  “Ain’t no valley low,” I responded, until the three of us sang away on fresh tires. Devan would be a source of optimism, joy, a beacon of unflappable positivity throughout this journey. She’s that kind of friend, both on and off the bike. The one who gets you outside of your head, until you’re singing or dancing, whatever the moment calls for. She takes both the ordinary and extraordinary experiences, and gives them just a little kick, by befriending strangers, by whooping and hollering on bikes riding through the city streets at night. I’m not sure where I will end up when my fellowship ends in a month and a half, but I can’t imagine doing life without this friend, and vow to keep in touch no matter where we both end up.

We pitched our tents in the dark again, only slightly faster than the night before and fall asleep exhausted and content.  We churned out sixty miles in the daylight and at dusk, we took turns leading our pace line. The sun set into a dim light until headlamps and bike lights were necessary. I turned mine on and picked up speed a bit, glued to mile 114, our resting point for the night. We were quiet except for the occasional “woah!” exclamation that happened when an owl swooped down beside us to pause on a branch and each time we reached an aperture from the woods into grassy openings that gave way to the stars and heavens above. Away from the illumination of the city, our lights and headlamps shed the way 10 feet at a time. It dawned on me, as I continued to ride steady, that I didn’t even want to try and look more than 10 feet ahead. I couldn’t see beyond there no matter how hard I tried, and might miss something important if I attempted– like the unexpected tree root or rock or quiet fox that brushed against the space between trail and grass. It occurred to me how many times I’ve tried tracing shapes out of the shadows, trying to figure out the shapes and contours of the future, when all I really needed- and all that was really beneficial- was what was right before me- those precious 10 feet of light wrapped in the ambiance of quiet, cool fresh evening air. In 2010, I was diagnosed with Generalized Anxiety Disorder, a future focused orientation to life that detracts from the present. Since then, every change, every decision was often met with a system of checks and balances, wanting to ensure security and assurance in a world that cannot promise that. But here, on these quiet bike trails, this stream of light pouring from my bike reminded me of the new way in which I wanted to orient myself with the world. I end a year long fellowship in two months and feel convinced that this is the time to travel for a few months and figure out the whole career thing when I return. It doesn’t feel natural to not know what’s next, and I somehow feel irresponsible for taking a timeout to learn from the world. But here, the only thing that feels more irresponsible is to not take advantage of this natural break to taste more of this world and the people in it. These trails speak of a freedom, an unconventional way of life that’s countercultural to societal norms of work, marriage, home ownership, and family in a linear fashion, as though that molded timeframe is supposed to fit everyone. If these paths could speak, I’m sure they would whisper just one word, “Freedom… freedom…” gently but firmly, over and over again until the word and all its possibilities hug me on the shoulders like a wise parent who guides and then sets free.

We reach the end of the canal and find our way uphill to a YMCA campground consisting of an open soccer field, port-a-potty, and a nails-on-chalkboard loud train on a small hill above us about 20 yards away. We fell asleep and woke up several times to that stupid train, until it was morning and Devan greeted me with a cheery, “Good morning!”

“Uhhh,” I groaned back, cursing the morning light, clamoring for sleep instead of embracing our third day of adventure. A few caffeinated gels later, I perked up enough to speak in respectful sentences and we began our second leg of the journey into the Allegheny. Our 80 miles take us uphill, downhill, and back up again; exhausting, but hope filled. If I ever need to have my faith restored in humanity, I will remember the rural Pennsylvanians who shared free water and a place to rest along the trail, the many people who offered us food and even rides to our campsites “in case you don’t make it before dark,” and these friends who shared chamois creme when my butt was on fire. We reached our campsite in the dark, where another friend met us for the final leg.

Our last morning began with sliding down a natural waterslide in 55 degree water. Invigorated, we pedaled onward. We reached mile 270 by afternoon, and I was already grieving the journey’s end. The circus I performed for my neighbors trying to balance a cot on an old crate I found in the basement. The night we showed each other planets and other parts of the sky that we didn’t pay attention to back in the city, until we’re laughing on our backs about things that really wouldn’t have been so funny if we had not been biking 80 miles into the 10 PM night sky. Funny how you can want it all back- the saddlesoreness, the rough starts, the bugs that hit our jackets like raindrops. The down trees that force you stop until you decide to take a much needed beans-from-a-can dinner break. The flat tires that get changed much faster when its you and three friends, each teaching one another a pointer we learned along the way from some other cyclist, until by the time our fifth flat arrived, we had an assembly line of sorts down pat. 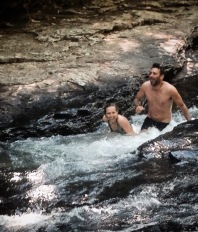 Evening sun illuminated bridges and tall buildings off in the distance. Pittsburgh. I thought about others’ journeys to freedom, like those souls that constructed the highest point of the bridge, then walked across for the first time, and what sense of freedom that must have felt like. And for how many, now well over a century later, find leaving across this bridge to be a form of freedom from a quotidian routine, and for how many, entering this city is a different kind of freedom, one of return, arrival, a sense of home and hope. There are so many kinds of freedom out there. We raised our bikes above our heads from the bridges into the sunset. I did not think of the future, and I was free.

One thought on “330 Miles of Freedom: On Bike Camping and The Paths That Teach You”