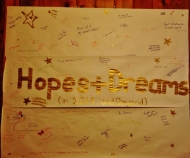 It started with friends coming over for a post-New Year’s party featuring a dream wall that everybody signed with goals, hopes, and dreams for 2014 and beyond. We each happily began our year, friends coming back throughout the months that ensued to check off items, scratching out a few that didn’t stir our hearts anymore, and adding new ones along the way, because we are ever changing, and true dreams recognize the wind and waves to move with you, not against you.
Right now, I can only tell you my journey of those winds and waves this year.
It went a little something like this:

I found my people.
Together we biked down city streets at night cheering at the top of our lungs so free. We climbed trees, played ukuleles in each other’s backyards, square danced, and laid under stars together. We told stories, shared struggles, asked bigger questions, stepping away from black and white into grey, yellow, neon green, and those hues Crayola has yet to codify.

I celebrated firsts.
My first jellyfish sting.
My first skinnydipping on Playa Flamenco, a beach on the island of Culebra. And it was everything I thought it would be until a second jellyfish stung me and I ran out of the late night water screaming, forgetting to cover my parts.

I fell in love.
Not in the traditional romantic sense.
But with the Earth, animals, and humanity.
I fell in love with chickens, experiencing the joy of chicken farming and that tingly happy feeling you get when you cuddle a chicken.
I fell in love with the night sounds and the warm breeze that wafts into your tent as you fall asleep with the window unzipped.
I fell in love with a city that grew me up into maturity.
Then I moved cities, far away enough to seize an irresistible new opportunity for growth, but close enough to come back and sit on its docks in total silence feeling like I just had the best conversation in the world.
I settled into a new house with roommates from India and Canada.
I left a job and began a new one.
I changed perspectives.

I judged certain people and realized the ways in which I am every bit as much of a contributor to the problem as part of the solution.

I defended myself silly until I learned to stop pining for my opinion to receive external validation.

I went pescatarian, and at the end of this year, watched a man reel in a fish that bled profusely as he removed the hook, making full-on vegetarian one of my 2015 goals.

I ditched make up. For good. And don’t feel guilty about the times I whip out tinted sunscreen under my eyes after late night writing binges.

There were tough calls, hard breaks
An ended relationship like a fissure with jagged edges
That ended more beautifully than I could have ever imagined.

I developed confidence. Developed it by forcing myself to tell others about my book idea-turned-into-action. And I kept telling others even after I received discouraging feedback in an encounter that left me so embarrassed, I ran out of a conference room and cried in the bathroom. Then I gave myself a pep talk, walked out the bathroom door, and the next day, told triple the amount of people I’ve ever told in a single day.

I developed it by openly disagreeing with others, stating my opinion, and making my voice heard. There was that work meeting where a man interrupted me and I said flatly, “I wasn’t done speaking yet,” without even a second thought about holding back.

I felt.
Felt afraid of riding my bike for the first time as I rode in an ambulance to the ER with a friend who got hit on a training ride. I felt afraid after getting hit by a car on my morning commute, grateful for how minor it was. I felt afraid of training rides with a new team after there were three weeks in a row of accidents. I felt resilience as I rode and trained anyway. I felt freed after I reached out to female cycling friends once I realized just how afraid I became, and was met with encouragement and understanding. I felt joy as I had more and more God-its-good-to-be-alive mornings on my bike, my freedom machine, my Big Blue. The kind of mornings that make you stand up on both pedals and say, “Weeeeeee,” biking fears replaced by biking bliss.

I wrestled. With seemingly everything.
Marriage. God. Myself. Gender. Anything with one too many question marks. Privilege. Food justice. Bike parts. The back door lock. Academia. The front door lock. The US political party system. Women- only spaces. Mouse traps. Death. The future. The past. And the length of this paragraph.

I learned.
Learned from friends who live in Rwanda what it was like to grow up during the genocide. And then, I learned about the peace and reconciliation process of Gacaca, moved as my friend told me, “People think Rwanda’s story is about genocide. But what they don’t know is ours is a story of forgiveness.”
I learned that perhaps if we aren’t experiencing joy in our lives, it’s because we’re not creating it. And with that, I stopped at a waterfall that I used to zoom past every day on my way to work. Stopped to take pictures. Stopped to close my eyes so that I could solely focus on my sense of hearing- hearing that thundering waterfall sound with a few birds chirping in the background. And I would make sure to do this again when it snowed and again when it thawed until the only thing that stopped this newly adopted morning routine was moving away.

I spent money.
On a new racing bike, a Specialized Alias, feeling only one twinge of guilt over the cost before smashing it to the grindstone, remembering that privilege guilt doesn’t actually create systemic change, and that part of my triathlon passion is not just the joy of the sport, but in challenging gender norms.
I spent it on airfare to Puerto Rico, where I timbered trees with a WOOFer from Czech Republic who’d sing the words of Ke$ha everytime the tree fell: “It’s going down, I’m yelling timber…”

I interviewed people. Interviewed women in their 80s, 90s (including my 93 year old grandmother) and even 100s, on their lives, asking hard questions, receiving even harder answers. I interviewed men regarding gender dynamics, and walked away with full reality of male privilege but completely excited about allyship and creating spaces for women and men to talk about the messages we face daily but often don’t bring up.

I let go.
Let go enough to be silly and join strangers-turned-friends in giving out free hugs at the Farmers Market.
Let go enough to dance on a street corner to “Jump on it” with a woman who was homeless.
Let go of the cradle-to-grave life itinerary I used to demand and took on a one year global health fellowship. I have no idea what I’ll do when it’s over in 7 months. But never the matter. I’ve let go. And choose to believe it will all work out.

I laughed.
Laughed as friends and I sledded, saucer-ed and snowtubed down a staircase-turned-snow ramp during the polar vortex, bombogenesis, snowmageddon that was winter 2014.
Laughed as my dad told me stories about his life “BC” (before children)
Laughed at myself as I mispronounced bike parts and for the first time, it didn’t sting; the need to prove myself as a competent women replaced by need for humor and grace.

I stopped.
Stopped going to Church.
At least the one that meets on Sunday mornings in pews, instead experiencing the kind of Church that happens when you’re about to go into your house but something catches you outside, urging you to sit on the porch ledge and ponder the Pleiades until your gaze becomes a wordless prayer as you experience the intimacy of God like one thousand choirs filled with sacred song.
I stopped filling journals with worries and instead, created “memories I don’t want to forget” pages, trying to capture experiences that leave my mind all too quickly.

And as quickly as it started, so quickly it’s ending.
Benjamin Franklin, looking at a painting of a sun that artists found difficult to decipher as a rising or setting sun, once said, “But now at length I have the happiness to know that it is indeed a rising and not a setting sun.” The coda to this year may end with 11:59:59 on the clock, a few dim stars in the winter air, about to be blasted with fireworks. But in my heart is tomorrow’s sunrise, an invitation to not just a new day, but a new year. I can already peer into its apertures, knowing 2015 will bring another move, some wanderlust in Africa, my 10 year high school reunion, and lots of humble embraces with old and new friends. The dot-dot-dot ellipses of these 365 days ahead remain a mystery, but we’re about to fill pages with color, question marks and exclamation points.
Two thousand fifteen.
Let’s write the next first sentence in our stories that are ever changing, ever evolving,
forever living onward into a beautiful infinity. 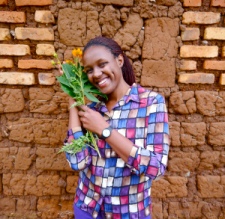 I grew up in Kigali but I was born in Butare, a University City in southern Rwanda. I grew up during a very challenging period because in my early childhood, Rwanda experienced one of the worst holocausts of our century. I grew up in a society torn by this division which engendered a profound mistrust among its children. But this doesn’t include the fact that I have known the insouciance and innocence of a childhood, children’s plays and oral stories told by the elders.

I grew up in a family of three girls and one boy. My father, though highly educated and very smart, was like the majority of African men who believe that women must play a secondary role in society. He was constantly recalling this. But my mother, a very emancipated woman, always whispered the contrary in our ears. At the same time, whenever something was…