“In order to do this,
we must see men as our allies,
our partners through thick and thin.”
-Ana Ake, Tonga, Africa

With the 2015 target deadline fast approaching, many NGOs are evaluating how far we’ve come in reaching the Millennium Development Goal benchmarks. These are 8 goals officially established on September 8, 2000 at the UN Headquarters to set an action plan in place for international development. Of the 8 goals, the goal that I feel most passionate about is Millennium Development Goal (MDG) 3: Promote gender equality and empower women.

This goal has come a priority for me to carry out in my personal life. I’m still sorting out what it looks like—- and what it doesn’t look like.

For most of my life, I’ve viewed gender equality as focusing on changing the stereotypes of women and ensuring women equal opportunities outside of the home. However, as public policy expert Anne-Marie Slaughter points out in her “Can We Have it All?” TED talk,

“I still think we should do everything we possibly can to empower women, but that’s only half of real equality. I now think we’re never going to get there unless we recognize the other half…”

To share a personal example of how I see this in my professional life, let me share some of my thought processes in working with men and women living with HIV and substance abuse. In this particular grant project, I am assigned to both male and female patients for a six month behavioral intervention focusing on empowerment to achieve health and social goals, including HIV care and substance abuse. When I would be assigned to partner with a woman, I’d get really excited at the prospect of seeing a woman empowered to live out personal, economic, and health-related successes. When I was assigned to work with a male, I would feel an initial sense of disappointment because I thought that somehow I wasn’t living out my passion for women’s empowerment. But to stick with this mindset is a narrow-view of gender equality. As USAID notes, “Gender equality means that males and females have equal opportunities to realize their full human rights and contribute to and benefit from economic, social, cultural, and political development.” In my work context, I now see how healthier men, free of substance use, who become elevated to greater personal, health-related, and economic prosperity turn into allies in the journey towards gender equality. When men can be healthy, whole, expressive people without mountains of societal expectations placed on their shoulders, women can also be healthy, whole, expressive people without having to see “work OR family,” but instead, the both/and: “work AND family.” I learned to change my perspective and now, whether working with a man or a woman, I realize that I am contributing towards gender equality when I view the larger picture of the societal impact of healthier women and men. For some, this is a no-brainer, but for me, it took some time to connect the dots between male and female empowerment.

Though I still feel convicted that more energy, capital, and social will need to be given towards advancing the promotion of women and girls, as partners and allies, we also need to see that part of gender equity is highlighting non-traditional roles of males in the media and in our lives. When men are portrayed as fathers, caregivers, educators, and participators in home and family life, we alleviate the burden of women being pigeon-holed into these roles. We offer women and girls a larger perspective of parenting- that not all of the responsibilities of parenting will inadvertently fall on one parent simply because of their gender. Girls and boys see that men and women truly can become and do anything. 100 years ago, it was hard for some to imagine a world where women could vote. 50 years ago, it was hard for some to imagine a world where interracial marriage was legal, let alone socially acceptable. 10 years ago, it was hard for some to believe that any more states would come alongside Massachusetts to instate marriage equality. And today, thought it might be hard for some to see men as care providers and other “non-traditional” roles, history has shown us time and time again that,

“the moral arc of the universe is long, but it bends toward justice.”
(Martin Luther King, 1965) 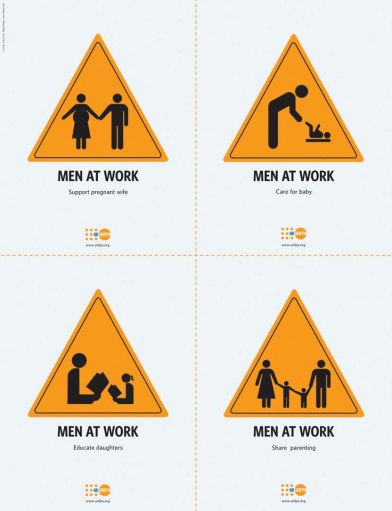