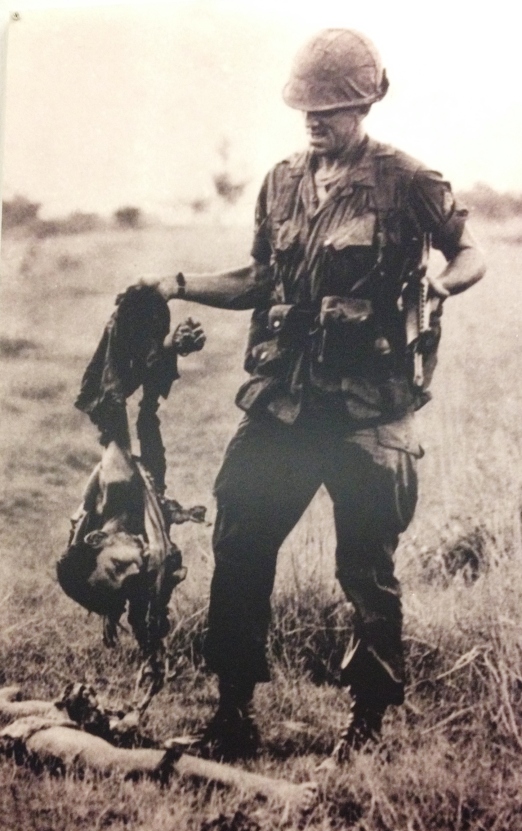 “Over 14 months, 2,750,000 tons of bombs were dropped, destroying 20% of the property in Eastern Cambodia, forcing 2 million Cambodians to become refugees.”

“From 1961-1971, the US sprayed 80,000,000 liters of Agent Orange to deforest land to prevent hiding spaces for Vietnamese people and to create a starvation campaign. This killed several hundreds of thousands of people, causing illness, birth defects and contributing to poverty in several hundred thousands more.” 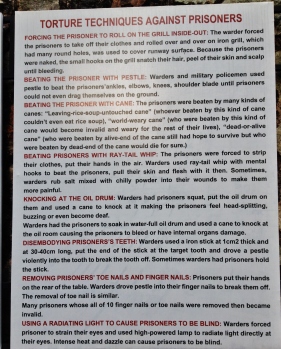 “The U.S. committed crimes of aggression, including the testing of weapons prohibited by the laws of war (napalm, phosphorus bombs, combat gases, and toxic chemicals). The U.S. government is guilty of genocide vis-a-vis the Vietnamese people.” -Conclusions of the Bertrand Russell Tribunal-Stockholm Session, May 2-10, 1967

“The U.S. action in Vietnam was a military intervention to prevent the evolution of a people. Will napalm, phosphorus bombs, and other means enable a foreign power to achieve what the Gestapo (secret police of Germany) and concentration camps enabled a government to achieve from within? Such is the question posed by the U.S. intervention in Vietnam.” -Maurice Deverger, professor at the Paris Law Faculty, February 9, 1966

“Warders had prisoners take off their pants and sit on a bench with a hole. The warders would tie prisoners’ legs and burn their sex organs from below.”

“Bombs still continue to injure and kill Vietnamese people today. Officials stated it would take 100 years and $100 billion to clear the country of ordnance.”

Tears welled in my eyes for the four hours I spent at the War Remnants Museum in Ho Chi Minh this past December, but more than anything, indignant anger pulsed through every part of my body. I was 28 years old, halfway around the world, learning for the first time of the inhumane horrors my country committed, ranging from use of chemical warfare to burning mouths of Vietnamese prisoners to cause death by starvation. I felt angry at the flag, disappointed in that my public education taught me pride in my country, but omitted to teach me of my country’s dehumanizing evil acts, while making sure to teach me of other country’s poor actions. We took a field trip as seventh grade students to the Holocaust Museum in Washington, D.C., had an assembly with a Holocaust survivor speaking to us of her experiences, and were taught in many history courses about Nazi Germany. In fact, most of the time I heard “Germany” in school growing up, I heard “Nazi” as the leading adjective.

About the only consistent thing on my six months of world travel–that included my trip to the War Remnants Museum–has been meeting Germans. Discouraged and angry from my museum trip, I sent a message to one such German friend saying, “I can’t look at the U.S. flag the same way.” He wrote back sharing, “I felt so disgusted by Germans when I went to a concentration camp for the first time. I couldn’t believe it. Although it was so horrible, I couldn’t close my eyes seeing films report about the time…”

Over the course of my travels, I’ve had conversations with over 75 Germans who shared that German students are taught the full realm of what happened during the Holocaust. Teaching about the Holocaust is mandatory in German schools, with trips to concentration camps or memorials a common experience for German youth. I remember talking with a German friend while hiking the Camino de Santiago about Germany’s history and he shared, “We were made to feel guilty.” This sentiment can be translated to “Vergangenheitsbewältigung,” akin to “wrestling the past into submission.” This came up in a few of my discussions with Germans, including my current German-Australian host mother, whose children grew up in Australia “always singing the Australian national anthem in school. We never once sang it in my childhood growing up. You weren’t allowed to be proud to be a German.” This experience is echoed by University of Munich professor Lars Rensmann, “Something which is very common for young Germans to say, ‘I don’t want to hear about the Holocaust. The Americans did the same thing with the Indians, and the Israelis do the same with the Palestinians.'”

Oh, how I long to hear American students have the same complaint, “I don’t want to hear about our colonial past. The Germans did the same thing with the Holocaust; the Israelis with the Palestinians…” Perhaps we could balance our pride with a sobering education to our youth about the U.S.’s full history, not glossing over the parts we’ve tried to sweep under the rug. In teaching young generations the truth of a nation’s history, a country owns up to its misdeeds. Pretending or ignoring the fact that they didn’t happen just because they weren’t our finest moments doesn’t make them go away.

In addition to discussion in the classroom, one cannot travel in Germany without noticing recognition of the history in some shape or form. I remember walking the streets of Bremen with one of my German friends and he pointed out “stolperstein,” or “stumbling stones” on the sidewalk, which are bricks with the name of someone who died in the Holocaust and how they died, if known. These bricks are laid in front of the place he or she last freely chose to live. Other memorials can be found throughout Germany, most notably Berlin’s Memorial to the Murdered Jews of Europe, taking up an entire city block, consisting not only of a Holocaust Memorial, but the Memorial to the Homosexuals Persecuted under the National Socialist Regime and the Memorial to the Sinti and Roma of Europe Murdered under the National Socialist Regime. Memorials and “stolperstein” alone cannot bring reconciliation and opponents to the stepping stones argue that pedestrians and cyclists step over them all day long, victimizing individuals twice. Still, I argue that countries such as the U.S. would bring about recognition of the humanity in all if we honored the populations we have victimized since our colonial mistreatment of Native Americans. 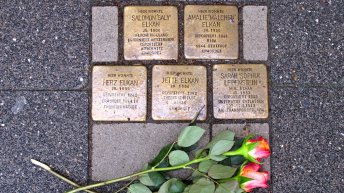 Nearly 70 years post-Holocaust, I wonder if students in countries like the U.S. may learn of a different Germany legacy. Germany welcomed over 1.1. million refugees in 2015, though debate lingers over the exact count, while the U.S. has taken in less than 1,000, with promises made by President Obama to take in 10,000 by the end of the year. Chancellor Angela Merkel, Time Magazine’s 2016 Person of the Year, has been unsurprisingly mocked and praised for her actions, including being called “courageous” by President Obama, “insane” by Presidential Runner Donald Trump as well as a “traitor and whore” from German protesters. Her approval ratings have dropped more than 20 points, yet she echoes repeatedly to German citizens, “Wir schaffen das,” or “We can do this.” This steadfast resolution is exactly what we need in the midst of refugees who report experiences such as, “We’d be walking in the street [in Syria] and suddenly see somebody shot in the head and fall dead right in front of you.”

Another lesson countries like the U.S. can learn from Germany?
Travel.

As I mentioned purely anecdotally, since I left the U.S. in July 2015, I’ve had conversations with over 75 Germans in all 18 countries I’ve been to. In contrast, I’ve met about 30 Americans in 16 countries. I always laughed when German friends I’ve made along the way would comment, “Oh great, more Germans!” sarcastically when more Germans would arrive to hostels or Workaway sites. Many factors can be cited for Germans’ reputation of being well traveled, such as four weeks vacation time, the common practice of taking a gap year for travel, and even, some purport, the social constructs of freedom and movement that came from the fall of Berlin Wall. Whatever the reason, travel expands our hearts and minds and fosters global understanding.

In a world that often tells stories through violence, threats of terrorism, war, displacement and xenophobia, this global understanding is exactly more of what the world needs. We need more global recognition of our respective home country’s pasts- the good and the bad- and to lift each other up whenever we swing too far to one pendulum. I’ll never forget the words of one girl from Germany that I met early on in my travels on a soccer field in Togo. Recalling Germany’s 2014 World Cup win, she stated flatly, “It was the one time you could be proud to be a German.” Her words reverberated in my heart that’s held a hand over it reciting The Pledge of Allegiance verbatim since Kindergarten. Though my country has done many things I am not proud of, regardless, pride in being an “American” (a term I struggle to identify with in a world that forgets there are many Americas—North, South, Central, to name a few) is a socially acceptable and almost expected construct. My global travels this year have taken me to countries such as Nigeria, in which I was stuck for 28 hours in the Lagos Airport hearing a news story about Boko Haram. I was reminded of the gratitude I have for living in a country in which I grew up feeling safe. I felt especially appreciative of the many freedoms I’ve experienced in my lifetime. But these travels have also taught me- as the tears in my eyes welled thick from the War Remnants Museum in Vietnam- to think critically and learn from the people and cultures around you. Today, January 27th, marks Holocaust Remembrance Day. I honor not only those persecuted in one of the worst acts in humankind, but also the cultures that are actively seeking to write new histories. May we be bold enough to listen and see beyond the single stories we may have been taught. 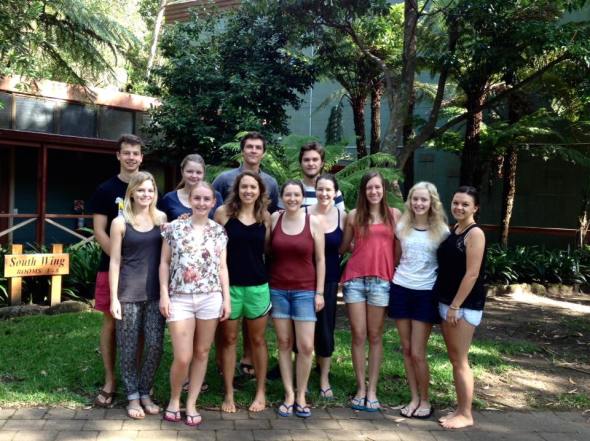 11 of the Germans I stayed with in Sydney, Australia MO 2016

*I try to limit advertising on my site in order to give readers the best reading experience. That being said, I do need to support myself. Grateful for any Amazon purchases made through my blog: http://www.amazon.com/?_encoding=UTF8&tag=likbirontre-20 I will receive a small percentage of sales to support my writing. Thank you!