I didn’t come here looking for God, and these cathedrals at times felt like both a haven and an inferno. I was once scolded by a priest for taking communion, given the firm instruction that I was not welcome to partake in this practice in the Catholic Church as a then Lutheran. I wasn’t exactly the most likely candidate to pursue a spiritual pilgrimage on a historically Catholic rooted trek that once offered pilgrims the reward of plenary indulgence. But here I was walking some 500 kilometers across Northern Spain on the Camino de Santiago with blisters on my feet, using God’s name as both a noun before “damn it” to complain about the rain and a noun after “Oh my” to raise my biggest praise for vibrant rainbows cascading into forest treetops.

My relationship with God is finally at a place that feels like freedom after dabbling in Evangelicism with a noose around my neck for a few years, grateful I no longer sit down in circles that tell me I’m to be submissive to men and that there will be people who burn in Hell. My freedom hit the ground running in 2012 when I joined a Church led by a lesbian pastor committed to inclusion, the same year I began writing, no longer quelling my questions and convictions. But my real freedom came when I left the Church altogether and began to understand for the first time what M83 might mean when they sing, “The city is my Church.” Because for me, Church happened on my bicycle, when my friends and I gathered around the table, and whenever I stepped outside. The Church outside the Church is what I intended to celebrate on my pilgrimage.

The idea of pilgrimage is a funny one to me, because while I believe time alone in solitude with one’s maker is an incredibly fulfilling spiritual practice, I never thought you had to go somewhere to experience it, and I have to think that pilgrimage is less about going here or there and more about a spirit of open eyes, open palms, an open heart. But something pulled me to the Camino and so I went. I heard along the way from other pilgrims that the journey would be three-fold: physical, mental and spiritual, for many, in that order. I could write pages on the first two, but coming fresh off my finish, right now I’m savoring the spiritual that illuminated the ways in which one can find God in this world.

I experienced God in the beauty of the Earth and the people who dwell in it. There was that morning where I stopped three times uphill, simply to look over my shoulder at the morning sun wrapping it’s golden arms around the mountains and whisper, “Holy shit. You are so fucking beautiful.” I believe I was talking to God without having to look him or her in the eye, this maker somehow already knowing my commentary was a reflection of its artistry, who saw my expletives as welcome words of appreciation over a world my human mind cannot grasp.

There were people who caused my heart to laugh as we gathered around dinner tables after days of 25 kilometer hikes. They were the ones who encouraged me to spend the extra euro on a glass of wine so that I might learn to savor the sweet pleasures we’ve been bestowed through our senses, no longer letting the fear-filled gossamer strands of family addiction tell the story of my relationship with alcohol.

There was that time a Spanish gentleman in his sixties came over to me while I winced trailside over bulging blisters on my feet. Able to speak only a little Spanish, I couldn’t answer the questions he began asking, but it didn’t matter; the next thing I knew, he was gingerly rubbing ointment all over my dirty, smelly, blistered feet. All I could do was say, “Gracias” with tears in my eyes as he went on his way. I later caught back up to him and we spent that night in the same hostel together. His name was Manuel and he began calling himself “my Spanish grandfather.” The next morning, he started singing as soon as my alarm clock went off and came over to my bed to lavish more kindness on my feet by repeating yesterday’s ointment massage. Saying goodbye to him a few days later brought more tears to my eyes. I’m convinced he’ll never know just how much he touched my life, and those are the kinds of people who make the biggest impact in our lives. What else can I do but try to spread that humbling kindness forward, as someone who experienced a person quite literally take on Jesus’ call to wash each others’ feet, my own now on their way to healing?

This was the Church I knew existed, the kind of God I believed in. It was this God who was that thing that caused my stride to slow before I entered my hostel many a night, gaze lifted from the entrance to the sky above, gaping at the plentiful stars. S/he was what kept my feet from taking me on the path each morning so that I would instead sit down on ledges and sip hot coffee while watching the sun rise. S/he is what caused my worries to absolve as I stared in wonder while these rays of light stretched their arms into the space of a new day, like a newborn infant who just discovered its own hands and legs, aware of the acute possibilities that lie ahead, rising strong and seemingly all to quickly into its maturity.

These moments of wonder, beauty, human connection, the simplicity of walking one foot in front of the other each day, open to conversation and observation of the time and space around you, are the elements of pilgrimage for which I am most grateful. As cliche as it sounds some 500 kilometers later, I really do feel like my pilgrimage is just beginning.

Because I believe pilgrimage, like God, is all around us, and within us, and whether we are on this path for the first time or the 199th, there is still something here for us. Maybe not something of a revelation, but of noticing, of paying attention, of shifting our gaze from ourselves to the sky or the children’s laughter at the park. If we approached this day as pilgrimage, a wandering toward creation, toward God, toward each other, toward the Earth and sky and stars, how might we see the world?

I don’t think I will see the world the same way I did here in Spain, and to try and hold onto that purview would be futile when all around us echoes pilgrimage, this soft stirring to open your eyes in curiosity every single day. And when pilgrimage is all around, it extends beyond a noun or verb, becoming a posture, an orientation, an approach to living out our own humanity. And sometimes that posture is rugged, as you walk for miles in a duct-taped together poncho, threadbare jeans telling the story of the time you fell downhill alone in the woods. Other times, it’s arms open wide, as the pilgrim in front of you turns around to look at the mountains behind you, whispering, “Boy, sometimes it’s nice just to look back and see how far you’ve came.” In all of this and all the postures in between, there is something divine that happens when we put one foot in front of the other. And maybe if I keep doing that, however imperfectly, I will keep encountering that Divine. While I’m not looking for it in a Church nor pining for that proverbial moment of enlightenment, as if to arrive at some illustrious gem of truth, perhaps I will unknowingly stumble upon it, as a pilgrim, until one day I am on the other side of a beautiful infinity, recognizing God’s face, seeing it for the first time, but knowing it was that face that was walking with us all the way. 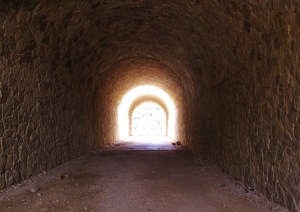