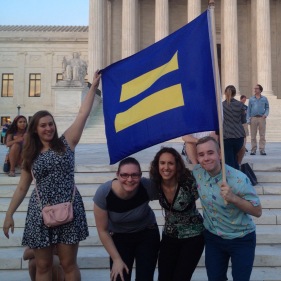 “Excuse me, do you know what this line is for?” I asked the last person standing in a line outside the Supreme Court on Friday.

“Oh, I think it’s just to get into the Supreme Court to walk around as a visitor,” he responded.

“Today’s a good day for that!” I smiled as I joined him in line.

We made small talk and noticed the guy behind us wearing a cool shirt with a rainbow akin to Pink Floyd’s Dark Side of the Moon album. We lamented that we both weren’t wearing clothes more celebratory, having just come from work. He handed us rainbow bead necklaces and put on a sparkly green hat. We became friends, walked inside, and started decorating statues of old men with our beads, taking pictures every time, having only gotten yelled at by a security guard once. We took pictures in front of the Supreme Court sign and selfies on the steps outside, thrilled just to be here.

The energy was electrifying. We walked through the crowds of people who were celebrating- and a few warning angrily of God’s wrath- and began listening to people’s stories. There was the woman who let us pose with her peace statue, a staple she’s carried to the first and second Gulf War protests, HIV/AIDS marches and here to the Supreme Court two years ago to the date to celebrate the end of DOMA. There was the woman next to her who showed us three signs she made. “This one was going to be for if they voted against marriage equality,” she showed us, pointing to a sign that read, “Unite the States of America” in big rainbow colored letters. “This one for if they decided to keep it to the states,” she explained, referencing the sign that read, “The moral arc of the universe is long, but it bends toward justice.” “But instead, I get to hold this!” She exclaimed, bearing a sign that read, “Not just gay, ecstatic!”

There was a man wearing all black with red bike lights tied around his waist, shouting that men who have sex with feces are going to hell, and so are men who have sex with men. “Come on, let’s hug it out!” A guy implored. “This is not a time for hugging,” The man replied back flatly, going back to calling out his warnings against “homosexual acts.”  “I’ll give you a hug!” I called out the imploring hugger and we embraced tightly, while enthusiastic passengers in cars continued to drive past waving, cheering, honking in conviviality.

Tears warmed my eyes thinking about how far we’ve come since 2004, when Massachusetts lead the way by becoming the first state to recognize same sex marriage. My own journey in becoming an ally to the LGBTQAI community began with actual action in 2012, after a dear one shared that growing up they considered committing suicide because of the bitter retaliation they received simply for their sexual orientation. I’d always wanted to become a better ally, and this person’s experience reminded me just how urgently all of our voices are needed for equality. I joined a church with a focus on LGBTQ inclusion, led by a pastor who was a married lesbian. I got involved with Believers for Marriage Equality, a series of videos from people in the faith based community voicing support for marriage equality as we neared election time, in which we Marylanders would vote on marriage equality since protesters garnered twice the amount of signatures needed to place a referendum on the ballot.  On March 1, 2012, same sex marriage was passed by Maryland’s General Assembly, and now on election day, ran the risk of being taken away through Question 6.  I wrote blog posts supporting Question 6 and advocated for it on social media. I went to the Marylanders for Marriage Equality election night watch party and celebrated with newfound friends as Maryland became the first of three states that night to vote in equality. My friendships became more diverse. I went to lectures on marriage equality from a public health perspective (Access to health insurance? Right to visit a sick loved one? Yes, this is why I love public health). I brushed up on the history of marriage equality, got pissed off, and joined organizations that were moving equality forward. I say all this not to call attention to myself, but to hopefully paint a picture of why I will forever remember June 26, 2015, honoring the blood, sweat, and tears of activists who’ve done much more than me to collectively bring us here.

This is a victory.
We made history.
And I am celebrating.

But it didn’t take long for me to see all sorts of social media posts about other injustices going on in our world. Violence in Burundi. Burnings of multiple predominately black Churches. Terrorism in Tunisia. Human trafficking. More details on the Emmanuel AME Shooting. Baltimore County officers shoot and kill unarmed man. The intersectionality of all of these issues- and the actual lives affected by such broad sweeping experiences- demands more action, voices, and public outrage. Even the SCOTUS ruling doesn’t mean everything will be ALL rainbows, as we consider that people who identify as LGBTQ still experience higher rates of poverty, worse health outcomes, bullying and job discrimination compared to those who identify as straight or heterosexual.Societal attitudes also aren’t different overnight just because of the SCOTUS ruling, but as we consider the changing public opinion of gay marriage, going up in public approval rating from 67% to 73% in just this past year alone, I am hopeful that we are indeed “bending toward justice,” to quote Dr. King.

We still have a ways to go in achieving social justice in gender equality, immigration, racial unity, ending war and violence and so many more areas.

But just for right now, I am taking a sabbath to rejuvenate my soul by relishing in what can happen when we collectively organize ourselves into activism. I am listening to others’ stories of what this ruling means to them. I am taking full advantage of every free hug I can get. I am pausing to witness every single rainbow flag I have seen lining the streets of my home city. I am smiling at the increase I’ve seen in the number of hands held by people of the same gender—just in one weekend alone— perhaps because some people who once may have felt unsafe are just beginning to feel as though they can truly be themselves and be respected. I am feeding off this energy I feel as I see people talking to one another, feeling less like strangers and more like the brothers and sisters we truly are. I see an influx of connecting, as perhaps we can ever so slightly stop having to fight for equal marriage and simply get on with the loving and enjoy our cake while we’re at it, too.

I know that even after a wedding, there are still challenges that come, conflicts that arise, differing opinions about important and not-so-important things that must be worked through with grace. And we, too, as a society will have to come back down from the apex high of Friday’s decision. But I know I will be able to return to the peaceful fight for justice with more tenacity, vigor, and passion if you can just let me soak in this sabbath in which I am still celebrating. I may need to take a longer sabbath than some, and some may need more time than me. But come together again we will with just a little more space to tackle these other social justice issues as I slowly loosen my grip from the battle for marriage equality, more room in my hands for activism, strength, a patient heart that understands we are daily writing our histories and though some pages are long and others thin, together, I believe, we are still writing something beautiful.