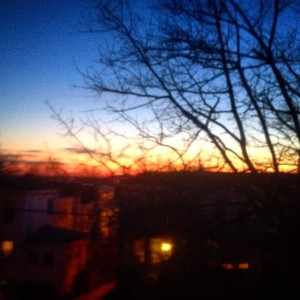 It’s my favorite space in the house- the top story bathroom which has a small, rectangular window perfect for catching evening sunsets or for smiling at the moon while brushing your teeth. During the fall, I’ve spent hours taking sunset pictures, all the while my soul coming closer and closer to the present moment until I am in an entranced, gentle place filled with color, wonder, and no words.

Tonight I was having one of those yearnings as I looked outside the window. I opened it wide, feeling slightly warm March air press lightly against my face. I scanned the trees to find the birds, whose brown feathers matched the still bare trees, blending in, yet standing out because of that infectious song. Their lively chatters echoed my souls’ celebrations of this last week of winter, knowing not just by the dates on the calendar, but by their choirs that spring is indeed coming.

I grabbed my camera and began snapping some sunset shots. There were two birds singing shoulder to shoulder, true love birds perhaps. I wanted them to move just one branch over to get that perfect shot of the birds’ silhouettes against the backdrop of a cascading orange and red sky. Just move over. I begged internally. Come on, move a little to the left. Slightly annoyed at a missed opportunity for a “perfect” shot, a still small voice whispered in. “Just watch. Just enjoy this as it is. Stop trying to make everything so perfect. Embrace this as it is, not how you wish it would be.” With that I closed my eyes, to solely focus on the delight of the birds’ song. I lingered in this space for a good 20 minutes before wandering back to my room that connects to this bathroom. I left the window open to keep enjoying the birds while I worked out. The night darkness came over, chirps turning from a mellifluous sonnet to an evening lullaby.

And then I heard three loud bangs, a pause, and a few more bangs. Could that have been…? No. It wasn’t, I reasoned. I lived in an under-resourced area of Baltimore for a year, in which there were a couple shootings around the block that I was fortunate enough not to have been home for. All the bangs I did hear in that neighborhood ended up being kids playing with firecrackers, something that’s fun to do, apparently, even when it’s not July 4th. But there are few kids in my current neighborhood, and the ones I have seen are toddlers, plus the seldom one or two six-year-olds.

A swarm of police and an online crime alert confirmed my fear. Helicopters circled overhead. My roommates and I looked out the window to find several police cars a block and half up the street, in clear view from this top story window. We gave each other tight hugs, talked about our own privilege, talked about longings for peace and justice, talked about the neighborhood in which we live, met with its quirks and joys, marked by outsiders and many insiders as “up and coming,” a seemingly trite phrase that has some grain of truth if one considers “coming” to mean gentrification.

Within the next hour, the police cars became fewer in number. I can still hear the “bang, bang, bang,” noise sharply in my head. I look out the window one last time, wondering at what point the birds had stopped singing. I supposed they could have gone to sleep before the gun shots could disrupt their song. But even now as I type this, I can still hear an insomniac bird making noise, as if to have some company in his or her sleeplessness.

All of this feels so disparate. How did the view from the window go from lingering in the beauty to facing the reality of violence? It’s so hard to acknowledge that this same experience happened in one night. They seem so incongruous, the latter incident being one of disbelief- did all of that really just happen?

Yes, it did. We live in a world in which it is possible to hear the song of birds and cacophony of gun shots in a single night. We live in a world with incredible shades of red and pink and purple nearly every evening. And we live in a world in which damaging floods and hurricanes can come from that same sky. I live in a body with hands that long to hold another’s, limbs that long to wrap themselves around someone, a smile with an upper lip that shows a lot of gumline. And I live in a body that yelled, “Are you fucking kidding me?” to a driver yesterday who got too close to me while I was biking. A body with a brain that thought demeaning, judgmental thoughts towards someone today. A body that once accidentally drove through a red light and hit another human being, the “How could you!?” narrative reverberating not from outside sources, but internally.

So much darkness.
So much light.
So much life.
And so much of this life is that space between the darkness and light. Finding hope in despair, beauty in the presence of pain, something sacred in the midst of the banality. So much of life is seeing it and feeling it all, and still gazing your head upwards, feeling love for your Maker in the midst of walking away from a particular way of practicing this love.

Tonight as I lay my head, I’m grateful for this Maker that I’ve come to know as God. Grateful for the light, room in my hands to accept both of these incongruous experiences. Grateful that there is something beyond the darkness, a story whose ending pages read of love over hate, joy beyond suffering, of discovering there is room for all of us in this story, that no one is or will be left out or left behind.

And for now, I’m in that space between. The one that has the synonyms and antonyms in the same sentences, and tonight, even the same breaths, encouraged to “just hold on to the way it is tonight and learn to love through the darkness and the light.”

2 thoughts on “The Night Gunshots Interrupted the Birds’ Song”