“Early to bed, early to rise, makes a man healthy and wise,” I read from my morning brushing-my-teeth book: “The Daily Book of Positive Quotations.” What about women? I think to myself.

It’s remarkable how accustomed we are to hearing “men” used generically to mean both “men and women” that we forget how exclusionary is to not include women in our word choices.

I bike to work and see a man in a white coat portraying a doctor on a billboard for a healthcare company. I turn the other corner, and there is a car parked outside of a gentlemen’s club advertising the club with several half clad women in bikinis. I cringe, frustrated that often when one stops to scrutinize advertising, you’ll encounter gender mores that give us hints as to how we grow up to believe or assume certain qualities of genders.

It’s amazing how customary it is to see, at times, distinct, dichotomous portrays of male and female “roles” or activities.

My Ironman backpack I use each day for my commute- and yes, I did use permanent marker to say “IronWoman.” Photo: MO 2013

Ironman. Savageman. Eagleman. Quarry Man. Hammer Man. Chesapeake Man. These are just six of the many “man” triathlon races in my state. With a name that includes “man” in it, we are subtly suggesting that men are more so the targeted audience for these multisport races than women. We can be hopeful, though, for more gender equity in the sport, as women continue to be a key growth component in the sport – 55% of newcomers identified in this study are female.

When we use the word “man” and correlate it to a typically male-dominated activity (sports), we propel the stereotype of men being encouraged to play sports, while women can simply tag along if they feel like it.

I hope that these critiques can point out the need for gender-fair language.
The National Council of Teachers of English (NCTE) has an excellent resource which provides great food for thought on how to make language word choices more gender equitable in our everyday conversations. I pass this along not to chide anyone for not being “feminist enough,” rather, to offer a platform for discussion about gender fair language. After first reading this, I became acutely aware of examples every single day in which we hear “gender-fied” words which subconsciously divide the two sexes. When we use gender fair language, we affirm the inherit dignity, worth, and value of every person, female, and male. We inspire children to realize that they can be a nurse, doctor, law enforcement officer, teacher, irrespective of one’s biological sex. No one gets left out. Everyone is included. And we realize there is room at the table for all of us- men, women, transgender, rich, poor, black, white, tan, or in between, all loved, all valued, all respected. 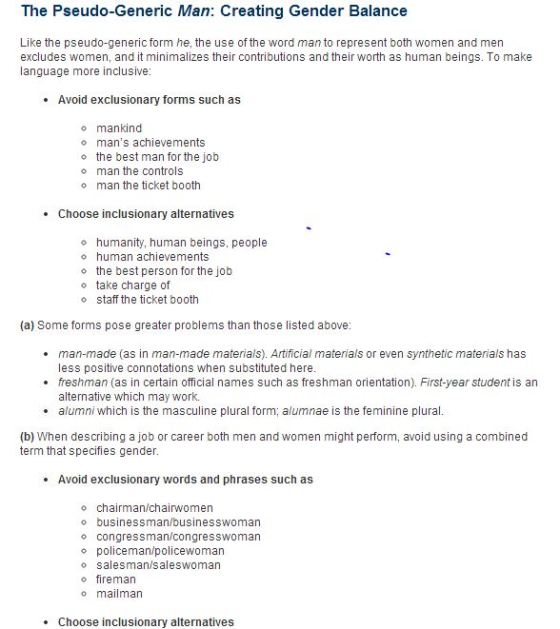 When is the last time you heard someone use “man” or “men” to mean both “men and women?”
When is the last time you heard someone challenge stereotypical norms, such as citing an example of a nurse as male, or an example of a police officer as a female?
Do you think that if the media portrayed men and women in occupations or roles that aren’t “traditional,” we would inspire young girls or boys to pursue their interests (and not what they think they should pursue as a male or female)?

2 thoughts on “For all “Mankind:” Promoting Gender Fair Language In Everyday Use”