“Swatting the air with the back of his hand, Tour de France director Christian Prudhomme says he has nothing to say to a group of female cyclists hoping to one day ride in the sport’s greatest race.”

That familiar grit returned to my face in angst as I read and re-read that line from a July 16, 2013 ESPN article describing Prudhomme’s dismissal of women’s participation in the Tour De France. We still live in a world where one man, with the waff of his hand, can deny women the opportunity to participate in international athletics, I thought to myself in disbelief over and over again that July day.

I then recalled the poignant words that Susan B. Anthony spoke in 1896: “Biking has done more to emancipate women than anything else in the world.” Consider the male professional teams, who earn at least a mandated minimum salary of $29k, while women have no mandated pay, often earning less than $11k (which is below the poverty line). Rather than accepting this, pro women have made a documentary “Half the Road” to disclose the inequalities in women’s cycling. I thought about the team of 11 women I road across the state of Maryland with to support women in Cambodia and Malawi through Women Who Stand. Women have a lot to say via a bike, if only we keep creating new opportunities for ourselves. A day after reading the ESPN article, I came across a change.org petition started by World Ironman Champion Chrissie Wellington and National Championship Cyclist Kathryn Bertine petitioning Prudhomme to enact a 2014 women’s race in the Tour De France. Excited to see such activism, I began posting the link to local bike stores’ Facebook pages, asking for their commitment to equality. And then it hit me: Dedicate the 70.3 Boulder Half Ironman I was training for to advocate for women’s participation in the TDF. Because, simply put, we don’t have to take “no” for an answer. We’ll ride anyway.

The next few weeks flew by and it was time to experience the exhilaration and rhythm of swim-bike-run against the backdrop of the Colorado Rockies. With “until we all can race” hand-written in permanent marker on my racing jersey, along with “TDF” written on my biceps, sun rising over Boulder mountain peaks, I made my way toward the sandy shoreline start of the race alive, not defeated. Rejuvenated, not discouraged. Frustration turned into action.

As we geared up for the start of the race, 1800 athletes, some in the zone through stolid concentration, others through jovial fist-bumping, I stood there on the shoreline in goggles and swim cap, looking straight out into the 7 AM sunrise over the Boulder Reservoir, sunlight kissing my face. I can practically hear the contagious, alive rhythmic pulsations of The Edge’s guitar intro of “Where the Streets Have No Name” (my favorite pump up song) blasting through every nerve, synapse, bone, marrow, skin follicle of my body. I thought back on all of the times I experienced gender inequality. Every time a male pastor tried to dictate what my gender was and was not allowed to do. Every time a military personnel tried to tell women what they could and couldn’t participate in within the U.S. military. Every time a man tried to tell a woman what to do with her body; a heartless dismissal of “rape is God’s will” instead of relentless love of victims who will one day experience victory. I saw all the scenes, heard all the voices, re-visited those trapped feelings of powerlessness, voicelessness and injustice as well as the fierce commitment to work twice as hard to become all that I can be as a woman. And then all those voices, all those scenes, leapt out of my body, disappearing, flying away into a lifeless dust cloud, gone forever, leaving me lighter, free-er, happier, reminded of the voice that I indeed have, that we all have. Reminded that we don’t merely have to let the loud, sonorous voices have the final say. That you don’t have to take no for an answer. We just have to get a little more creative with our peaceful rebellion.
Peaceful rebellion.
That’s what this year has been for me.
Trying to master the art of peaceful rebellion.
So here, in this red and white tri suit with words written on it in permanent marker, was my protest.
This was my peace song.
This was my coda to the ESPN story.
This was freedom.
This was power.
This is my anthem today.
This is change.
This is now.
Oh I don’t want to miss a single millisecond anymore. No. I don’t care how hard it’s going to get. I don’t care how tired I get. I don’t care about the thoughts that I will fight today in order to choose positive thinking over negative. I want to feel every pain, every joy, every step, every ounce of beauty my pupils can possibly let in. I want it all and I want it now and it’s right here, and it’s beautiful.

And so, there was nothing left to do but run through the “swim start” arch and dive into refreshing water, feeling the joy of my legs kick up-down-up-down, as my arms glide and pull through water, bringing me back to the sport I’ve loved since I was 10 years old at my first swim meet, thanks to the time and commitment of my parents driving me back and forth to 12 years worth of swim meets and practices.

Moving from water to land, I got my first question about my jersey on mile 10 of the bike portion. “Until we all can what?” a gentleman asks me. “Race in the Tour De France,” I reply back, panting up

our first incline. He gave me two thumbs up and biked onward as I got teary-eyed. I looked all around me at the morning sun hitting the 8,000 foot Rockies and all I can see is sun, lakes, and mountains pulling me into the deeper peace and beauty of life.

56 miles turns into a 13.1 run. 13.1 turns into a finish line I would have never reached without the support and encouragement of friends and family, without the passion and gusto of women and men who refused to be sidelined by inequality and injustice.
Today’s race earned a 12th place finish in my age group.
Satisfied, but in need of something to still run after, I attended the awards and rolldown ceremony in which 40 spots will be allocated amongst each age group. Only one of three spots was claimed for my age group; the second and third place finishers, for some reason, were unable to attend the championships and declined their position. They called out the 4th place finisher, the 5th place finisher, but no response. “Any women in the 25-29 age group category here?” I raised my hand, heart thumping. “Congratulations! You’re going to Vegas for the 70.3 World Championships!” A bit shocked, and not sure how this happened, or how I’ll pay for it, or why I would even worry about paying for it and instead, just go for it, I signed up on stage and returned back to the grass to hugs from my family.

I’m so glad this journey isn’t over.
Reality is, it never will be.
Because using your voice for good, for peaceful rebellion, doesn’t end at the finish line. But I couldn’t be happier to be taking it to Vegas.

This time I’ll take my jersey and go back over the “until we all can race” with triple-thick layers of permanent marker. I’ll bring little slips of paper with the web address of the change.org petition. I’ll wear a “until we all can race” t-shirt throughout the week, at warm ups and packet pick-up. I’ll write it bigger on my arms. I’ll write it on my handlebars. And even if only one more person signs that petition, I’ll know in my heart that this race has changed my outlook on what it means to do something about the things that make you angry, make you want to do something.

Because peaceful rebellion needs your voice.

See you at Vegas, 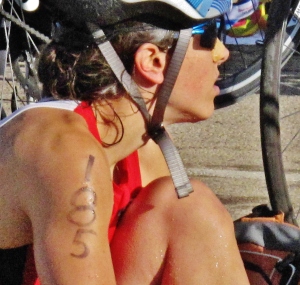