We are just under a month away from election day and, despite all the progress in achieving marriage equality in Maryland, it could just as easily be taken away depending on how Marylanders respond to question 6. Here are six reasons why I will emphatically vote YES for question 6 to support marriage equality:

6) Because I don’t believe that I have the right to deny the marriage of two consenting adults who love each other.

5) Because the quicker marriage equality is achieved, the quicker we can get back to using our time, capital, and media attention to address poverty, peace-building, human trafficking, and other social justice issues.

4) Because I want to add our country to one of the eleven that recognizes marriage equality. At the very at least, I want to remain one of the six states that currently recognizes same sex marriage.

3) Because the law gives freedom— freedom for people to marry those they love and for faith based institutions to choose which marriages they wish to recognize. (It saddens me to have to phrase this in such a way as to insinuate that some faith based institutions will disregard a couple’s marriage simply because they are of the same gender —-while eagerly welcoming in a divorced couple, another supposed “no-no” in the Church—-, but for those who are not ready to observe marriage equality, you will not be forced to change your faith based institutions’ stances or beliefs).

2) When I found out that interracial marriage used to be illegal, I was appalled and astonished. I also wonder where the Church was at this time. Was it supporting equality, love, and freedom? Or was it fostering hatred, judgment, separation, and inequality? I want my children and grandchildren to be so shocked that marriage equality used to not exist (i.e. they’re so accustomed to it that they don’t understand what the big deal was). I want to know that I, along with other people of faith, were on the sidelines voicing for equality, equity, and justice. 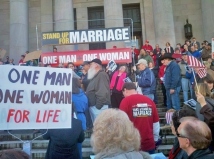 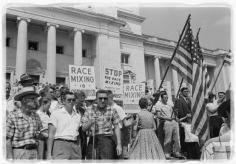 Is it any different today?

1) Because my life has been personally touched by men and women who are gay or lesbian. Marriage equality has a face and a story. If you haven’t already, get to know someone whose sexual orientation is different from your own. Your life just might be changed. For more voices and stories, check out Believers for Marriage Equality: http://www.believersforme.com/

Are you registered to vote in Maryland?
Check here: http://elections.state.md.us/voter_registration/index.html

*Photo credits for this page: http://interacc.typepad.com/synthesis/2012/05/divided.html