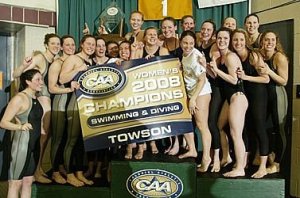 ——
Coach,
Just some thoughts going through my brain. I wish I would have said them sooner, or maybe said them while I was on the team but was too shy to actually do so…. oh well. That’s life. You learn.
——

I’m looking over my college journals, the one from freshman year where you said, “You will do things you never thought possible, if only you stick with it.” I don’t know if you realize how impressionable those words were to an 18 year old, but I believed it. I sensed something. Something was stirring in me that wanted to chase after all that life had to offer. And for the time being, right now where I was, it meant feeling my arms pull through water, not sure where the energy will come from to complete the next stroke, but completely confident that IT WILL COME. It meant taking up 3-4 tables at the Glen during dinner and awkward conversations in class the next day with classmates who wanted to know, “Hey, why don’t you guys shave your legs?” After trying to explain it, usually unsatisfied with my answer, the conversation usually ended with something like, “Well I just don’t get it; why don’t you shave like normal so you can swim fast at every meet?” …It meant calling up a friend and telling them the story of the time when one of the boys put icy hot in a another guy’s swimsuit. I’ve since forgotten who did that to whom, and I can still laugh about it, probably only because it didn’t happen to me. It meant endless chants of “Tow-son D-Team” and the sound of kick boards being smacked against starting blocks, signaling the start of another meet, a new opportunity to be entirely present to pain, success, and wondering just how much further you can push yourself.

See there’s this feeling that you get, and when you get it, you get it all over again and again. It’s this core acknowledgement that anything is possible, but that you have to go through some…  …stuff to get there. I began to get mad, I began to get pissed, thinking, “Maybe I’ve been playing it a bit too safe. Maybe after all this, after everything, WE are the very person who limits ourselves the most. Maybe I’ve been more afraid of failing, or not making it, or doing it perfectly. Don’t compromise yourself. Don’t settle for safe. Go ahead, set a daring goal time…” And yeah, maybe pain and hurt have to happen in order to get there. Maybe “obstacles” or “problems” were just blessings waiting to emerge. Maybe these tests are bound to happen so we can be changed, made stronger, and discover all we are made out to be.

In that process of believing despite difficultly over the next four years, I learned many things, most of which I learned in hindsight, not the present moment. I learned that adversity is not just fine-tuning; you can truly choose to come out on the other side knowing you can handle whatever’s coming your way—expected or unexpected. It’s that feeling you get when someone steps on your territory—- WHEN SOMEONE TRIES TO TAKE AWAY YOUR CHAMPIONSHIP, YOUR RING, YOUR BANNER— and something inside you bellows a defiant, “NO.” It’s days of barely holding on, writing “FIGHT” in big, underlined capital letters in your class notes with the last ounce of energy you can muster… and one day being able to crossover that word, and replace it with, “FOUGHT :)” because you did make it to the other side…

But most importantly, of all I learned, what stands out the most is realizing that it’s easy to sign up for the things in life that have little to no risk. Anyone can do that. But to live a life worth telling stories about… for that you have to DO HARD THINGS. You have to put time and dedication into something and hear people say, “You’re crazy.” You have to do bold things like make goals that almost feel uncomfortable stating out loud, because as soon as you do, as soon as you set your eyes on that horizon, criticism will come. And when it does, don’t let anyone take your 20/20 vision away from you.

So when you have your doubts, go back over the story, and ask yourself some good questions, like, “How have I grown throughout the journey that got me HERE?-” -To where you are RIGHT NOW. Think about what it means to be a part of this team. Feel the presence of all the classes and alumni that have gone before you, whispering a sincere, “You can do this.”  Maybe they’re just names to you, but as teammates told me of Jen Irby, and I told teammates about Kristen Johanson, maybe one day, you’ll be a senior, telling some freshman about some girl who went before you and maybe, just maybe, you’ll believe that this is something in your life that you will NEVER forget and even if you only see their face at the next alumni event, that smile alone will speak of a thousand practices, tears, hugs, and cheers that the two of you, along with a network of teammates, parents, coaches, and friends, faced.

Looking back on this journey of teamwork has helped me find my voice. Though at times I still battle the self-defeating voices in my head, I’m more confident now, more willing to take risks, more present each day. I’ve given myself permission to “make waves” because the “no-wake zone” is far behind me; in fact I can’t even see it anymore.

So today, find your voice.
Find your energy.
Look someone in the eye and tell them “thanks” because you didn’t get here alone.

And don’t stop there.

Sow your seeds in the morning. Reap them up tonight where you can whoop-it-up with all that it means to be a swimmer here on this team, right here, right now.

With love, gratitude, and all the cheers I can echo verbatim in my heart, 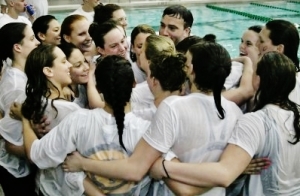 Join 2,332 other followers
From the Field